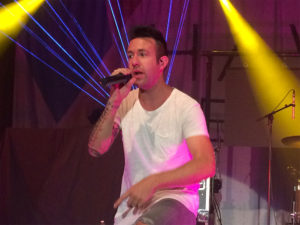 While driving yesterday, Hawk Nelson’s very popular single off their Diamonds album, “Drops In The Ocean”, came on the radio.  It reminded me how fortunate I was to have met and have a great conversation with their lead singer, Jon Steingard, last Saturday while on tour with Tenth Avenue North. The song goes into a deep perspective from Gods point of view on how He is for us and not against us. And how we can freely walk in His love. 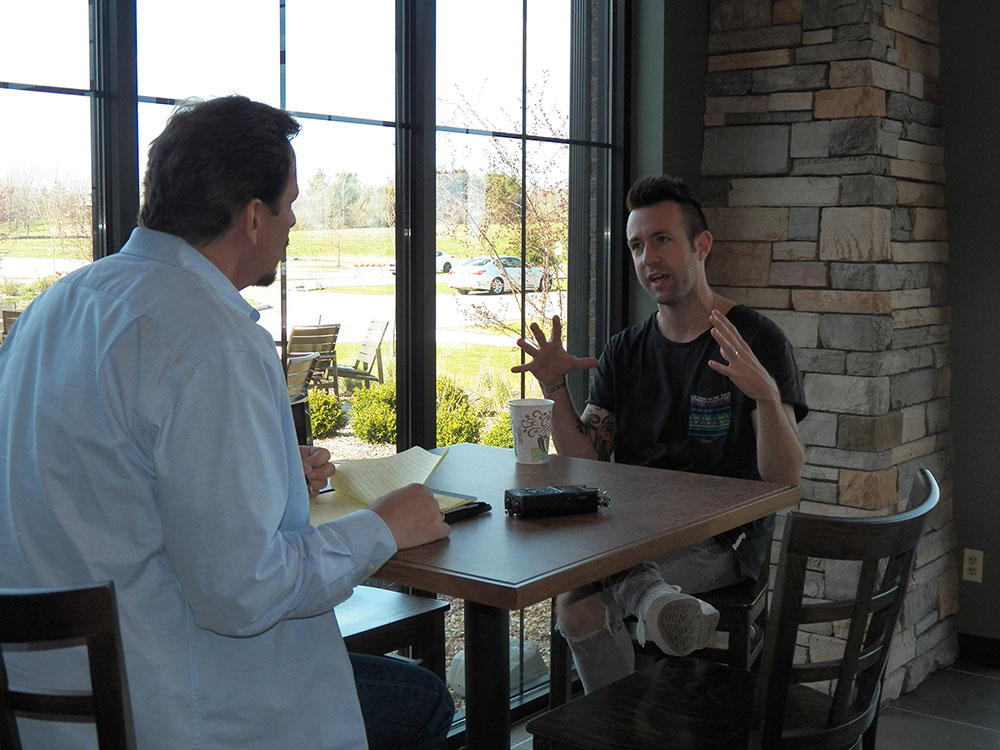 During the interview Jon was asked what had the most profound effect on him and his Christianity when growing up. Jon replied, “I am the son of a preacher. There was a period in my youth that I focused on other things outside of God and found those things didn’t bring me happiness or satisfaction. “Quoting Galatians 2:20, which says: “I have been crucified with Christ, and I no longer live, but Christ lives in me. The life I now live in the body, I live by faith in the Son of God, who loved me and gave Himself for me,” Jon explained he realized that, “It isn’t about me, but about being like Christ.”

Growing up in a Christian home, the music that influenced him the most was naturally Christian music. He states, “I grew up listening to Christian music. Delirious, Audio Adrenaline, and the old Newsboys were my favorites.”

Jon explained to Behind the Musician (BTM) how he became a member of Hawk Nelson. “I knew Daniel, the bass player who played for SWITCHED (who ultimately became Hawk Nelson in 2002). Starting out as the guitarist, I later became the lead singer after the original singer Jason Dunn left the band in 2012. My mother was the first to suggest that I should sing, but it was Bart Miller, from Mercy Me, who encouraged me to make the change, saying that that is where I should be.”

When asked if becoming the lead singer for Hawk Nelson changed the musical direction of the band, he replied, “Most definitely! While I was comfortable playing guitar to more punk music, I was not comfortable singing it. My comfort level was more with rock type music.”

BTM asked where he finds his inspiration to write and where he likes to be when writing.  He describes the circumstances which give him the best environment for being able to get the needed inspiration and to be able to focus on God speaking to him; “I write most of my music when my body is busy, but my brain is not. When riding in a plane, or mowing the lawn. Those are times when I am doing something mindless. My body has to be in a certain place, but my mind is free to think.” He goes on to say, “I used to struggle with wondering if the thoughts I had were mine or if God was bringing them to me. One day, God gave me the revelation that everything I have is from Him. He gave me everything. I couldn’t come up with an idea for a song if not for what He has given me. Christian music is more about the lyrics as opposed to secular music which focuses on the music itself.” Jon feels God deserves all the credit for his music, but he admits that,” Drops in the Ocean was the most difficult song for me to write because it is written from God’s perspective, not my own.”

Jon elaborated a little more on his writing; “Writers are asked frequently about the inspiration for particular songs. Why was it written, what is the underlying meaning? My goal is to get to a place where all my songs are self-explanatory. People can listen to the words or see our videos and know exactly what it is about, what the message is. Live Like Your Loved, our next single, was written with that in mind. There is no question about what the words mean. ”

Technology and social media are important tools in this industry, so BTM asked him if and how it has changed their music and how it has promoted it. Jon smiled stating that was a great question! “One thing I have to say, is that I hear all the time how people wish things were how they used to be”.  If I had a question for someone, I would just pick up the phone and ask them, is one of the usual statements he hears, he explained. “But my view is that we can’t wish for how things used to be, but we need to use what we have now. Chris, our Tour Manager, is our big technology guru. He keeps our Facebook page and other social media platforms up. We are just now getting into Snap Chat. We get more views on our Facebook page than on our website. You need to use what your followers are using.”

When asked how he knows when to stay with something because it was successful, or when to move on, he replied, “You always have to keep trying new things. Times, music, and even you as a person are always changing, so that needs to be reflected in your music. As soon as you say, “This is good, we can stop”, then you are done!”

Is there any down time? Not surprising to anyone of us with such a hectic tour schedule on top of everything else, that answer was, “Not much!” But what little time there is, Jon spends his time, “Learning new things! I always love to learn new things. Lately it has been producing. I produced part of Hawk Nelson’s last album, (their seventh to date), as well as doing some production work for Tenth Avenue North. I am getting more into video production. I tend to move onto new things quickly. I like to think that I finish my projects, but sometimes wish I would stay with one thing longer and reach a higher level at it before moving on to the next. I was also just certified for using the laser lights we got for our shows. Plus, I am very excited about a drone I just purchased,” he said with a smile.

Jon’s biggest “WOW” moment he had no hesitation in describing. “Playing with Amy Grant was a big highlight for me. Amy asked me to take the lead in singing one of her songs that she had not performed for quite a while, and so was not comfortable in doing it. I was so honored! I also played guitar in Toby Mac’s band and was only given three days to learn all the material! Toby asked if I was ready. I said I was nervous, but I was ready. He told me, if you are prepared, then just focus on having fun! Which I did!” 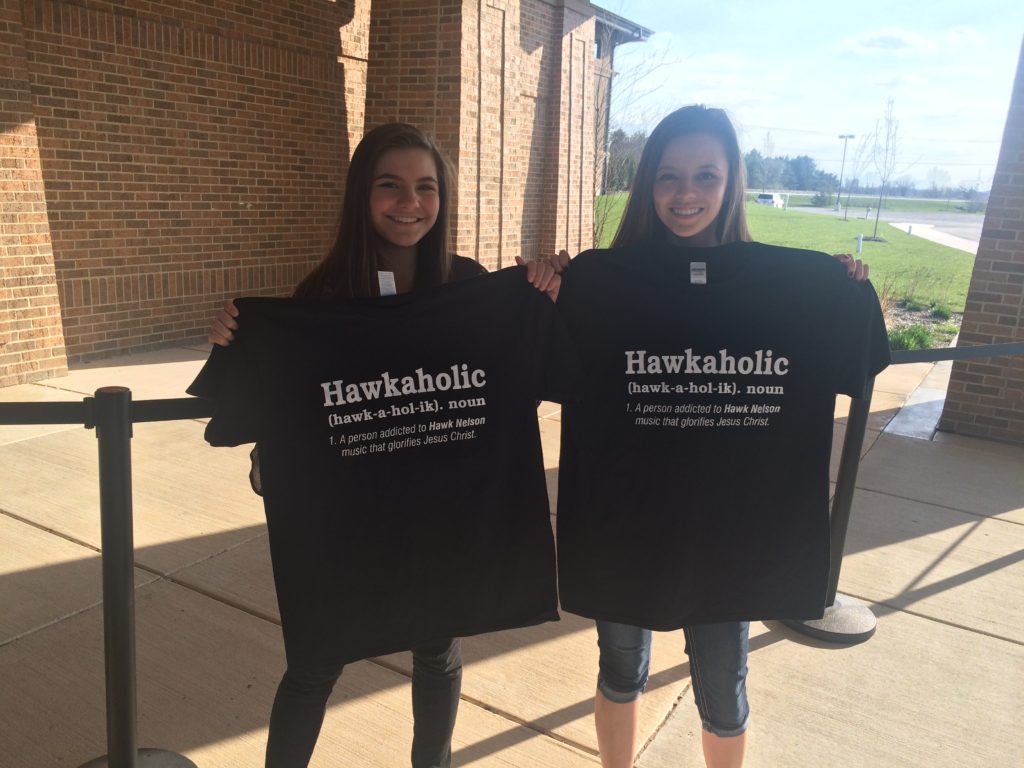 all about when their fame is growing so rapidly. It was very comforting and inspiring to hear his reply. “Most people have a misconception about what it is like touring as a Christian band. It is not as if women are throwing themselves at us!” At that moment two young girls stepped up to the outside window holding up T-shirts that read “Hawk-a-holic”. Jon chuckled, “Maybe this wasn’t the best time to use that answer!” But he went on to describe what the atmosphere is while touring. “We are all very close. Not just in spirit, but also space wise. There isn’t a lot of room and everyone knows what everyone else is doing. There is a lot of accountability. We are all also able to sit and talk with each other as we are now. We can tell each other when we see if someone is struggling or can ask if they need to talk.”

The most important part of any performance is what the audience takes away with them from it. What does Jon want for his audiences to take home with them? He sat back to reflect momentarily, then sat forward and very passionately replied, “We worship God at our performances, But I want to make sure that people leave with the knowledge and assurance that God loves them just as they are.”

BTM asked about future projects for Hawk Nelson. Jon told us, “We’re writing music for our next album and will be doing a mini tour later this fall with Tenth Avenue North and Dan Bremnes. We can’t wait to tour with Dan. Not that his music isn’t amazing, but we love his coffee!! He is an amazing barista! The best way to describe Dan is sweet…he is just a very sweet guy.”

You can catch Hawk Nelson’s high energy performance along with Tenth Avenue North and I Am They on the tour “All The Earth Is Holy Ground”.  Their single,” Diamonds”, is currently charted at #14 on Billboard’s Top Christian singles.