We discussed Citizen Way’s signing by Fair Trade Records. Ben recollected meeting with them to discuss Citizen Way songs that had been given to them by another artist.  “They told me ‘No’ a few times but kept listening.  We came down and played Should’ve Been Me (which was released on June 26, 2012 and reached as high as No. 8 on K-LOVE’s Top Song List) for them along with an acoustic version of How Sweet the Sound (released on September 27, 2013 and has gone on to become their first #1 single) and Where Would I Be Without You, all which came off our first record titled Love Is the Evidence.  They signed us a couple weeks later and six years later, here we are.” 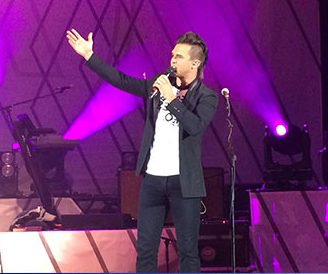 When asked what would you want your fans to know about you they may not already know, Ben commented, “I’m an Adjunct Educator.  I love to develop young artists.  I love to work on their songs, writing, editing, and then producing.  I work with artists down here, in Nashville, in my studio with others.  I’m part of the family of Full Circle Music an education/production record company as well, so I’ve been teaching and mentoring young artists.  I’ve been doing that for a while, a couple of years now here and there.” Ben added, “I do this over at Judson University in Elgin, IL, as well.”

BTM questioned Ben on how song ideas come about for him. He stated, “I just follow the inspiration.  I try to start from the end. For instance; does the title to a song belong on a t-shirt or could it be the name of a tour. For example, Bullet Proof is a shirt, it’s an idea, theme t-shirt.  You write the song to the theme,” he added.  “Bullet Proof comes from Ephesians 6: Put on the whole armor of God, that ye may be able to stand against the wiles of the devil. I just start at the end sometimes and I go for it first by bringing out an old guitar, new instrument, new drumbeat, on a good system with speakers in the studio.  You just keep pulling at the thread,” he conveyed. When writing songs, he elaborated, “I think there are inspirational places to be to write.  They come from anywhere.  Sometimes you have to look and listen.  Sometimes I’m in the car, driving with the kids and BOOM, a song comes across.  So, I turn on the voice recorder on my phone and start working on it little by little,” he expounded.

Inquiring on when he knew Bullet Proof would be a hit Ben said, “It’s the song that keeps coming back to you -and your gut says this is the one.  It has to be a long term, repetitive feeling that you get.  Once you have some experience of knowing this is the song.  If it’s working and other people are agreeing you sometimes just have to be able to take a risk and follow your gut,” Ben concluded.  He added, “With Bullet Proof, the song was written in a certain way with a certain beat because that’s what it needed.  That is what the song was when we wrote it and we needed to let it be what it was.  The first version of it didn’t work and what you hear is the last version that came out.”

Recently, it came out Ben had been working in the studio with Christian artists such as Bart Millard, from Marcy Me and Michael Tate, from Newsboys.  What asked how this came about, Ben commented, “Bart and I and our families are very close.  We hang out together.  We just wrote a new song together.” When discussing other artists, such as Michael Tate Ben has collaborated with, he mentions, “It comes from relationships and being willing to ask for the things you want and need.  Practicing for a million hours, the right to be heard, have an idea, and execute the will.  It’s all about people.”  Ben added, “I think you’ll hear a new single this March.  It’s been written but still being tweaked but we have it, yes!” BTM asked if he thought it will be a chart topper. Ben responded, “The public will have to decide that.”

Discussing the best medium for promoting music whether it be K-Love, Spotify, You Tube, Sirius XM, etc. Ben commented, “The best way to promote it is to come to a show, because that’s where you’re going to have a hard connection and from there it’s very easy go to Spotify, iTunes, or CD to buy those and go from there.”

Behind the Musician asked, what do you hope people take away from a live concert of yours?  Ben replied, “My goal is to have people come to know Jesus.  If they are moved to walk with the Lord and ask good questions about who Jesus is, then you know they want to know Him like you do.  That’s the goal.”  He added, “Putting on a great show inspires others.”

Reflecting on a most memorable concert or fan experience, Ben immediately said, “A really good one is when we played for the largest crowd ever assembled at Red Rock during their Easter celebration.  I shared the Gospel.  It was a multi religious morning.  People were talking about Jesus and I just told them the Gospel and they thanked me.  It was a sunrise service.  I didn’t sleep a wink the night before, but I got up there and shared the Gospel which was one of the defining moments of opportunities I’ve had for sure.  This happened about three years ago,” he concluded.

In response to asking if he would like to tell us if he had a bucket list, Ben laughed, “I would love to! A couple things; I want my family to come on the road, I would like to win a Grammy Award someday and have more opportunities to share the Gospel. I would also like to do well, have success and use that opportunity to share the good news of Jesus.  Whatever success I can earn, have, gain, I want to be able to use it.  The Holy Spirit is our Booking Agent.  That’s what I pray for.  The main objective is to go where HE leads.”

If he could change anything in the word, what would it be?  Ben said, “I would love to live on a big old farm, have all my family and friends be there.  They each have their own little house, horses, and a pond.  I want to live the way our Lord ordained us.”

When discussing the benefits of touring, he elaborated by saying, “Mostly, I love the camaraderie with the artists.  That’s what I really love and to see what the Lord does.  Every tour is different.  It’s all about people.  The fans you are with.  The bands develop relationships and friendships with people who are like minded.  You have a purpose in mind to share the good news of Jesus. That’s what’s fun.  Instead of just buying our records, come be a part of the family of God with us.  We love it too!”

While on tour, Ben’s favorite song to perform live is Bullet Proof.  When ask why; he said, “Just because everyone wants to sing it. It’s super fun!” Asking about favorite bands to tour with, Ben said, “Every single one!  We’ve not had a dud yet. It’s been amazing touring with Mercy Me, Big Daddy Weave, JJ Weeks, Jasmine Murry, Jeremy Camp, Newsboys, Danny Gokey among others.”

Wrapping up, Ben was asked by BTM what his favorite Bible verse is. He quickly responded, “Philippians 1:6,  Being confident of this very thing, that He which hath begun a good work in you will perform it until the day of Jesus Christ.  Love that verse!”

Ben Calhoun and Citizen Way are expected to launch their high energy tour this April and May with the band Unspoken.